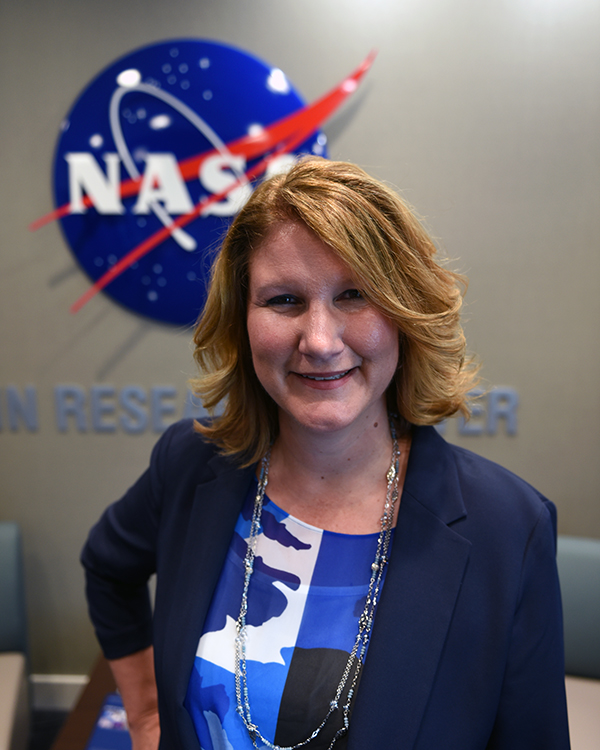 I sat down recently, over breakfast, with Trudy Kortes, an amazing woman making a huge difference in the world of STEM (Science Technology Engineering and Math).

Trudy is currently the Chief of the Human Exploration and Space Operations Division at NASA, based at the NASA Glenn Research Center, here in Cleveland, Ohio. In her impressive 30-year NASA career, she’s worked all over the country and has held several key roles, leading major space flight projects involving communications, navigation, power and propulsion, robotics and autonomy, entry descent and landing, and thermal technologies.

You know all those cool missions you hear about on the news? Oh yeah, Trudy’s been a part of a lot of those. And if that’s not enough to impress you, she’s leading a team of hundreds of people all working on the next moon shot, Artemis – sending the first woman astronaut to the moon in 2024!

But that wasn’t the reason I wanted to meet Trudy. Okay that’s only partially true – I mean, who wouldn’t want to have a conversation with a NASA engineer and leader? The main reason was her “side gig” – as a public speaker, mentor and career coach for women working their way up in STEM.

I’m a big believer in mentorship and career coaching. I’ve benefited from it and know what a difference it can make. So, as we noshed on our avocado toast and slurped our coffees, of course I asked about all the fascinating NASA stuff, but what I really wanted to know about was how she’s helping women who are working their way up through the ranks. Being women of a certain (ahem) age, we commiserated about challenges women face in the workplace,  laughed about idiotic things we’ve seen and endured in our respective workplaces, and shared stories about how we handled all kinds of uncomfortable situations.

It was such an engaging conversation – she’s smart, personable, and super funny – that when I finally sat down to write this article, I realized that I’d forgotten to take notes! Being the true professional (and nice person) she is, she agreed to respond to some questions via email.

Even if you’re not working in STEM or are further along in your career, Trudy’s got some great advice to share. Read on to learn what she has to say about following your gut, navigating career changes, and when and how to use humor in the workplace.

Q: A focus of your work is mentoring and coaching women working in STEM fields. If you could go back in time, knowing what you know now, what would you tell a young Trudy (Trudy in college or Trudy starting out in her career)? What do you wish you knew then, that you know now?

A: “Well, when I was younger, I was also thinner, and I would’ve told myself to stop worrying about my weight so much and to eat and drink what I wanted to before my metabolism takes a nose dive! Okay, seriously, to the subject at hand, I would tell myself three things. First, know thyself. Try your best (albeit difficult, because with experience comes a lot of “knowing”) to know what you like and don’t like and are good at or not good at and make decisions based on that. Second, I wish I had a level of confidence earlier in my career to use a stronger voice to speak up about things that were ‘not okay’. And finally, and most importantly would be a reminder to myself to always – ALWAYS – go with your gut instinct. It has never failed me and is such a powerful “inner wisdom”. I would say that listening to your gut instinct amounts to having faith in yourself, and so I would tell myself to have faith in yourself and listen to that all-important gut feel.”

Q: What are some of the particular challenges that women face in STEM workplaces as opposed to other fields?

A: “I believe that women in all industries and sectors, not just STEM workplaces face similar issues. First of all, I think it’s just really hard being the only woman or one of just a few in a work setting or meeting, especially a large, high-level meeting. That feeling of aloneness or isolation that comes from being one of a particular demographic is very real and can be intimidating. Not being heard, not being seen as an authority figure, being seen as lesser than a male counterpart, and having very few female role models who can relate to these unique challenges is also an issue. Perhaps in STEM women may face the additional challenge of being seen as not “naturally” technical. But I’ve spoken to enough women in other lines of work to know that these are across the board issues. You name it, it’s happened to me in my career. I’ve been harassed, talked over, ignored, inappropriately propositioned, had someone take my idea and claim it as their own, faced retaliation when I pointed out toxic workplace issues – even respectfully, and had people assume administrative duties were my responsibility even when I was the highest-ranking person in the room. I’ve faced these things and my educated guess tells me that most women have as well. But, I haven’t quit and have persevered. I hope all women persist in the face of hardship and that we seek each other out to talk to each other and fold our male counterparts into the discussion, especially the ones who WANT to help end destructive cultural behaviors.”

Q: How can having a mentor or career coach help young professionals, especially women, and women in STEM?

A: “There are a couple of benefits to having a career coach. Having someone to talk to as a sounding board and advisor who has been through the same or similar experiences and is completely outside of the bounds of the work arena of an individual is a significant career asset. First of all, it helps to ease the issue of feeling isolated or alone when one is in the minority in an organization. Second, people are typically “too close” to themselves to adequately and objectively evaluate their own strengths, weaknesses and gaps in their experience which they need to gain in order to advance or develop in their career. Having an advisor you can trust is essential to evaluate where you are, where you want to go, and how to get there. Each individual needs to manage their own career in a proactive way. Utilizing a mentor or career coach isn’t just a nice-to-have, it’s a have-to-have in today’s world.”

Q: One of the topics you speak about has to do with “non-linear” career paths. In this age of the “gig economy” and “encore careers”, what words of advice can you offer to those who feel stuck and are trying to figure out next steps?

A: “First, hire a career coach or talk to some of your career network that you trust for advice and get their thoughts on future paths and how to navigate those. Second, don’t be afraid to take risks in your career. Sometimes a lateral move is far more important in a career than a vertical climb. I made a lateral move which wasn’t advised but I knew it would net me significant gains in the gaps I had in my skill set. Sure enough, I was able to obtain a significant project management certification which, without that experience I wouldn’t have been able to achieve. It also helped me grow my network substantially and helped me formulate my second career in speaking, consulting, and career coaching.”

Q: Another topic you speak about is how effective leaders use humor. In my experience, it helps promote effective communication at any level in the workplace. Agree? But joking and humor can be so subjective. What advice can you give young professionals about using humor at work?

A: “I absolutely agree. Humor is a great common denominator. It can help a team build camaraderie, diffuse a tense situation, or just ease daily job stress. The caution I’d give to early career professionals is that a key skill in work life is to know how to read a room. Sometimes the situation calls for levity, but sometimes it calls for gravity. If some bad news was just delivered and everyone has a worried look on their faces, it’s probably not the time to throw out a one-liner. But, if everyone is in the throes of an intense action with a quick turn-around deadline, a well-timed, apropos, tasteful joke would probably be welcomed, and build your credibility as someone who cares about people, is a good teammate, and has work savvy.”

Q: What’s coming up for you? What are you up to next?

A: “I am currently booking clients for career consulting starting in 2020 as well as continuing to book speaking engagements. I have some speaking events coming up – at the Society of Women Engineer’s annual conference in Anaheim where I am talking about emotional intelligence for executive-level women, at GeekGirlCon in Seattle where I’m speaking on my career path, and I’m doing some unique things too – teaching an aerospace seminar at my alma mater (the University of Michigan) which will incorporate leadership themes, and speaking to the state government of Michigan on effective teambuilding. I’m also thinking of doing my own podcast or using some format where I can deliver my message and engage others in a meaningful way on these subjects that I find keenly interesting in today’s workplace.”

That’s something I feel strongly about, and it’s what makes Trudy’s mission so important. Thanks, Trudy, for taking the time to talk with me, and for all you’re doing to help women in STEM. And when that woman takes her first step on the moon in 2024? Yeah, we’ll all know there’s another great woman back here on earth who helped make it happen. Rock on, Trudy!

Visit her website (trudykortes.com) to contact her about career coaching and mentorship, or speaking at your next event. She was recently interviewed on the “Don’t Stop Us Now” podcast, which is a blast. Check it out here. You can also find her on LinkedIn and Twitter (@TrudyKortes).

Go Back to the Blog
Nominate a Rock Star

We provide killer marketing solutions for businesses and nonprofit organizations, right here in Cleveland (Rock & Roll capital of the world, thank you very much), throughout Ohio, and across the United States.

Any cookies that may not be particularly necessary for the website to function and is used specifically to collect user personal data via analytics, ads, other embedded contents are termed as non-necessary cookies. It is mandatory to procure user consent prior to running these cookies on your website.