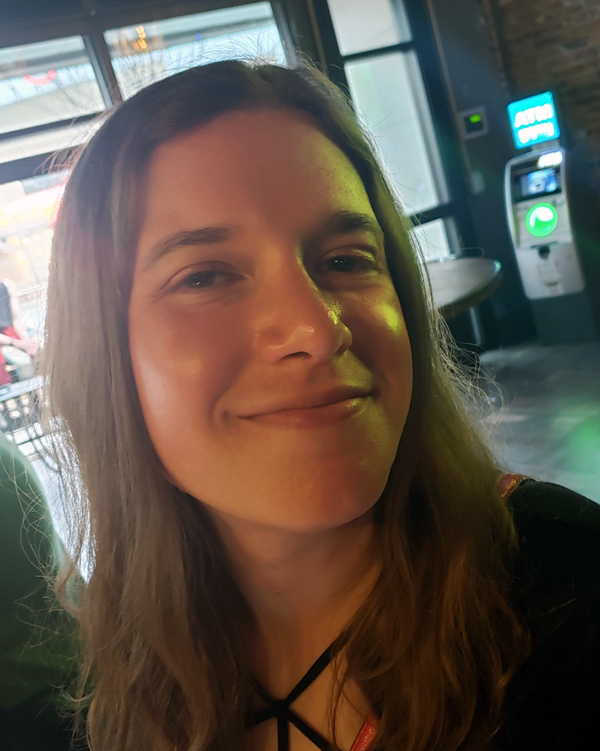 Today I’m going to tell you a story about courage.

To begin, I’m going to ask you to imagine yourself in the shoes of our intrepid hero.

Imagine, it’s a busy morning, on a weekday, and you’re brushing your teeth, just part of your regular routine, getting ready for work. Your phone buzzes and you see a notification that there’s going to be a Cuyahoga County council meeting that day and hundreds of protesters are going to come and argue against proposed protections that would safeguard your rights.

What would you do?

What would you do if the measure the council was debating came about, because in fact, there are no such provisions at the state or federal levels that specifically protected you from discrimination?

It was September 2018, and Cuyahoga County was considering legislation that would offer protections to people on the basis of the (already-protected) classes of race, color, religion, military status, national origin, disability, age, ancestry, familial status or sex, and would add sexual orientation and gender identity or expression to that list, ensuring equal access to employment, housing and public accommodations for all. It also created a three-person county Commission on Human Rights that could investigate and penalize cases of discrimination.

What did our hero do?

“When I saw it, I was just kind of like, ‘okay, there are going to be extremist protesters there’, and because we don’t want their voices to be the only ones heard at the meeting, I thought, ‘alright, I’ll show up’. So, I went.” At County Council meetings there’s a rule that everyone who wants to speak, gets to, for up to three minutes. So, our hero, put together a little speech.

“I just said something along the lines of, ‘I’m a veteran, and I and my fellow service members fought to protect the rights of all Americans – LGBTQ included – and we all should have the freedom and safety to live our lives. I served alongside LGBTQ service members, many of whom went to do dangerous things, and not everyone made it home. We should respect their sacrifice as well’.

“It was just this nice little thing. And then I looked around, and thought ‘Oh, my gosh, all these people are here’. They were so angry, they just showed up. They didn’t even pick the right day.”

Yeah, so funny thing. The protesters came to the wrong meeting. The proposed legislation wasn’t even being voted on that day.

“We knew on the day of the vote, then, that we better be ready. Because we know they’re going to be back. So, on the day of the actual vote, we got there, and whereas last time we were outnumbered, this time, we got about equal numbers. But without exaggeration, there were about 400 people in that room. And the people on the council, said, ‘we’ve never had this many people before, on anything we’ve ever done’. I thought, wow, of all the things they’ve talked about in this county, a non-discrimination ordinance should not be getting this many people protesting, and we should not have to show up in force like this.”

Here’s the part where things take an interesting turn.

When our hero, spoke at the first meeting, they weren’t completely “out” yet. They were presenting as a man, “wearing a suite and everything”.

It was at the second meeting, the day of the actual vote, in a hot, crowded room full of television cameras and hundreds of people, including angry protesters spouting hateful invectives, our hero – Eliana (“Ellie”) Turan – “came out”.

“I wrote this three-minute-long speech, you know, just talking about my life: growing up, being in the military and coming home, and wanting to make a life here in Cuyahoga County. But also, not being willing to live as someone I wasn’t anymore. That I was going to find that safe space and I really wanted it to be here, because this is my home.”

When asked if she was afraid, Ellie remembers, “I’m a public speaker, so I do a lot of public speaking, but I was getting really nervous, and there was a point where I thought, ‘I don’t know if I can do this.’”

Thankfully, the legislation passed (you can read more about it here).

But more importantly, for Ellie, life went on. Her career didn’t end.

“When I decided to come out, I knew that there was always the possibility of backlash. But I also told myself – I believed – that there were more good people in Cleveland than bad, so, I knew was going to be okay.”

But it took a long time to come to that conclusion. About ten years. Prior to that, in her late teens and early twenties, when she presented as a male, she didn’t feel safe, especially when serving in the military. Ellie (then called “Elijah”) was finishing up basic training and was about to be sent to Fort Campbell in Kentucky, when news arrived that a soldier was murdered by another service member, simply because he was in love with a transgender woman.

“That was a red flag for me. I was not in a safe place. So, I had to push a lot of my true self back. I wasn’t even free in my own mind to really explore who I was. I think that was a survival mechanism.”

So, it took a lot of time, and reflection, and education for Ellie to find her way. The process started after coming home from the service, while in college and then gradually happened in stages. Until recently, it was something she kept to herself, until she came out publicly in September.

“Even as a civilian, I was still living ‘Don’t Ask, Don’t Tell’ because I was still showing up to work as a guy. So, I thought to myself, the only way that people are going to know what the trans community can offer is for them to actually see us. So that was when I knew that I had to do it.”

Today, Ellie works in development for the United Way of Greater Cleveland, and because she came out that day in such a public way, she’s gotten the visibility that allows her to advocate for others in the LGBTQ community, specifically transgender and gender nonconforming people. It was at the second Council meeting when Ellie got the attention of the LGBT Community Center of Greater Cleveland, where she now serves on the board as the chair of the Transgender and Gender Nonconforming Subcommittee.

The Center offers a variety of resources to the LGBTQ community, including specific supports and programs for transgender and gender nonconforming people. As chair of her subcommittee, Elie is focusing her work on one specific area of critical concern – the Trans Mortality Crisis.

“It’s a multi-faceted crisis that occurs most often at the juncture of transphobia, homophobia, misogyny, racism, and economic inequality. So, whereas the risk levels for the transgender, and gender nonconforming communities are elevated across the board, those in the community who are most at risk are young trans women of color who are trapped in poverty. Cleveland, unfortunately, is a hot spot for that. And, the deaths occur in different ways. Homicides are a big thing, but then also, there’s suicide, overdose, and bad health outcomes. The public health aspect is complicated too.”

When asked about barriers to health care for people in the transgender community, Ellie affirms that some are systemic (though many institutions and providers are making great strides), but some of it is also situational.

“When you’re looking at the issue of the socio-economic marginalization of the transgender community, trans people live at very high poverty rates. It’s very hard for us to break into those good jobs, because a lot of workspaces are hetero normative, and not everyone who runs organizations are open and welcoming. So, what we find a lot of times is that if a younger trans person comes out, or they’re outed, based on the reaction of their family and friends, they may find themselves without a support network, in a time in their life when they’re not ready to provide for themselves. For those reasons, the trans community has higher incidences of not having access to medical care, not having medical coverage or insurance. So, when you put it all together? That leads to, on average, lower life expectancy.”

That’s where resources offered by the LGBT Community Center can help. The have several support groups, often broken out by age or other ways that people identify. They also have family support groups. In addition, the center recently opened a new complex, thanks to the generosity of an anonymous donor (and several others), which has space where Metro Health will soon provide services in their “Pride Clinic”. The center also partners with many other organizations including Equality Ohio and Plexus, Greater Cleveland’s LGBT & Allied Chamber of Commerce, which helps LGBTQ people find their footing and grow as professionals and business owners.

“We partner with a lot of groups so that we can work those synergies. Because the crisis is so complex and dynamic, it requires a comprehensive solution. No single nonprofit organization can do it themselves, but the center is helping to bring them together.“

On September 14th, the center will host “Trans* in the CLE”, a conference that brings together individuals and organizations for connections, resources and celebration. You can learn more about the event here.

As chair of her subcommittee, Ellie is often invited by businesses to speak, helping employers, and coworkers understand what it’s like for people to transition in a heteronormative environment, and colleagues can be supportive. She also writes for Crain’s Cleveland business (here’s a great article she wrote in May about the Trans Mortality Crisis), and recently joined the board of Connecting for Kids. Oh yeah, and she’s working on her PhD in management with a concentration in finance (I suspect one of her superpowers is not needing to sleep)!

Ellie is proud of the strides that Cleveland and Cuyahoga County are making. “I do believe that Cleveland is ready. And I’ve found that Clevelanders are, you know… just forget all those stereotypes about Midwest cities. A lot of Midwest cities traditionally have been very homogenous, broadly, but pertaining to their core business communities, I think they’re ready. And that’s what motivates me to get up every morning. I’m helping to break down those barriers and helping to show people who I am and what my community is all about.”

Yes, you are, Ellie.

Go Back to the Blog
Nominate a Rock Star

We provide killer marketing solutions for businesses and nonprofit organizations, right here in Cleveland (Rock & Roll capital of the world, thank you very much), throughout Ohio, and across the United States.

Any cookies that may not be particularly necessary for the website to function and is used specifically to collect user personal data via analytics, ads, other embedded contents are termed as non-necessary cookies. It is mandatory to procure user consent prior to running these cookies on your website.